This action was undertaken in the context of the Global Gateway project and of the EU-funded program “Civil Society Dialogue – Istanbul 2010 European Capital of Culture” in which NTLAB participated. The Global Gateway project was closely connected with the fact that Istanbul was proclaimed the 2010 European Capital of Culture. Therefore, besides promoting the EU-Turkey Civil Society Dialogue as such, one of the project´s main objectives was to foster the Turkish capital´s role as a cultural catalyst within emerging creative domains such as experimentation with mew media interfaces and techniques as well as art/science.

In this project the NTLAB (in collaboration with the University Research Institute of Applied Communication), under the direction of D. Charitos, organized a series of workshops and an academic symposium, titled Hybrid City, on the design and use of location-based activities in an urban environment.

The primary goal of the symposium was to highlight the potential transformative shift of the urban condition, as a result of recent developments in information and communication technologies (ICTs). Urban life is in a state of flux. The widespread adoption of technologies that facilitate social activity among prospective users influences community dynamics and introduces the emergence of novel forms of social interaction. The city is augmented through multidimensional processes. Digital information is embedded in persistent architectural forms (the built environment), while at the same time, representations of the urban setting are displayed on the screens of mobile communication devices.

Emphasizing the inherently interdisciplinary nature of technologically mediated urban activity, the symposium aimed at exploring the emergent character of the city, addressing resurfacing questions on the nature of the urban experience, as well as outlining strategies and tools for future social interaction and participation.

The “Codes of disobedience & dysfunctionality” workshop:

Technology reconnecting the personal with the political in a contemporary metropolis

In the context of the Hybrid City symposium and the Global Gateway events that took place in Athens, a workshop titled “Codes of Disobedience & Dysfunctionality” was organised from the 28th until the 4th of March 2011. The workshop was directed by the British artist Martin Rieser, in collaboration with an interdisciplinary team of artists, researchers and postgraduate students, from the Faculty of Communication and Media Studies of the University of Athens, the School of Architecture of the NT University of Athens and the Athens School of Fine Arts.

The aim of the workshop is to study the elements of the urban environment of Athens and to form a new trail as a structure of narrative, thus enriching the city with interactive content that reflects its contemporary transformations. Inspired by the posters and the graffitis encountered in the city, and taking advantage of the possibilities given by mobile communication technologies (GPS, QR codes etc) and the internet, the workshop aims to connect the urban surroundings of Athens to opinions and statements of its inhabitants regarding the challenges imposed by current social, political, and financial circumstances; anger, disobedience, opposition, dysfunctionality. The features of the contemporary metropolis in the midst of a period of crisis will be the main focus of the project, posing at the same time questions about the role and mediation of technology in urban everyday life. Can the new possibilities offered by technology really capture the needs and the atmosphere of a city like Athens? Can patterns and characteristics of urban life be identified when studying the use of these communication systems?

The work that was created after the completion of the workshop was presented at the premises National Museum of Contemporary Art, on the internet and in the center of the city (at Skoufa – Navarinou – Tzavela streets). From the 5th until the 25th of March the visitors of the museum and inhabitants of Athens were invited to follow the project’s trail and discover the different parts of the project’s narration. Special QR codes were placed in selected locations of the city and by scanning them with a mobile phone, access to the audiovisual material created during the workshop was provided to the audience. Combining elements of installation art, urban intervention, gaming and performance, “Codes of Disobedience & Dysfunctionality” reflects Rieser’s long term practice on art and technology.

The work can still be experienced online at: http://empedia.info/maps/41 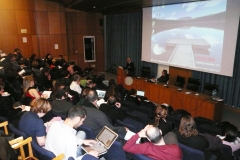 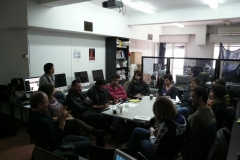 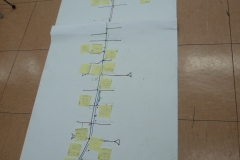 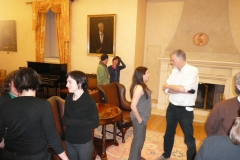 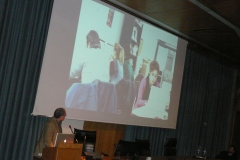 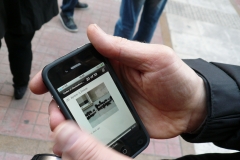 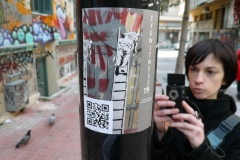 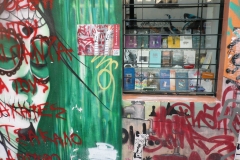 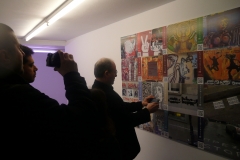 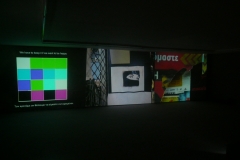 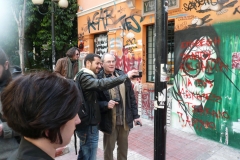